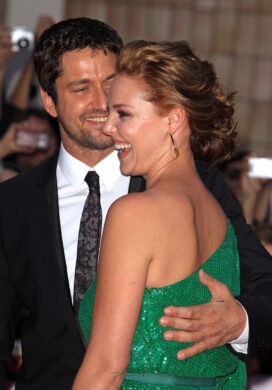 Gerald Butler is a Scottish actor best known for his role as King Leonidas in the film adaptation of Frank Miller‘s 300 (2007). Butler gave up a legal career to pursue acting, and made his movie debut in 1997’s Mrs. Brown (starring Judi Dench). Within two years he was a leading man, playing Attila the Hun on TV (2001) and Dracula on the big screen (2000). Roles in Reign of Fire (2002, with Christian Bale) and Lara Croft Tomb Raider: The Cradle of Life (2003, starring Angelina Jolie) led to a higher profile, and in 2004 Butler played the title character in the movie musical The Phantom of the Opera (co-starring Emmy Rossum). The success of 300 showed Butler at his manliest and most heroic, and P.S. I Love You, a romance tale with Hilary Swank released the same year, showed Butler’s soft, sensitive side. By 2008 he was a Hollywood movie star with firm U.K. roots, alternating between romance and action movies. His films include Nim’s Island (2008, with Jodie Foster), Guy Ritchie‘s RocknRolla (2008), The Ugly Truth (2009, with Katherine Heigl) and Law Abiding Citizen (2009, with Jamie Foxx).

Gerard Butler was awarded a Certificate of Bravery by the Royal Humane Society of Scotland in 1997 for saving a boy from drowning in the River Tay… Butler was mentioned in the gossip columns in 2004 and 2005 as a leading contender to replace Pierce Brosnan as James Bond.

Something in Common with Gerard Butler