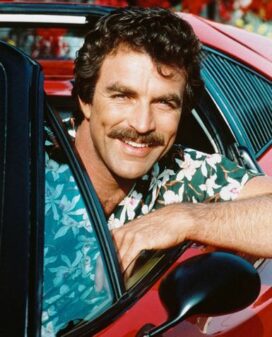 Tom Selleck is the veteran and mustachioed actor who is still known best for playing hot Hawaii detective Thomas Magnum on the TV show Magnum, PI. Brawny, rascally and devilishly handsome, Magnum zoomed around Oahu in a Hawaiian shirt and a Ferrari, solving crimes and wowing the ladies. The show ran from 1980-88 and made Selleck a big star. Tom Selleck was born in Detroit but moved with his family to the San Fernando Valley in 1948. Selleck went to the University of Southern California (playing basketball there) and then on to acting school. His first film role was a bit part in Myra Breckenridge (1970), and he appeared in TV commercials and various small TV and movie roles until hitting it big with Magnum in 1980. Since then he has been a steady low-key presence on TV, most notably with colorful recurring roles on the sitcom Friends (as Dr. Richard Burke, Monica’s older boyfriend, 1996-2000) and on the series Las Vegas (2006-08). He also played Robert Parker’s small-town policeman Jesse Stone in a series of TV movies (beginning in 2005). Selleck began playing another cop, Frank Reagan of the NYPD, on the series Blue Bloods in 2010. On film, Tom Selleck had a notable hit with Three Men and a Baby in 1987, but overall Hollywood has never quite known what to do with Selleck’s handsome-but-never-too-serious persona. His other films include Coma (1978), Lassiter (1984, with Selleck as a jewel thief), Quigley Down Under (1990, with Selleck as a cowboy sharpshooter), Mr. Baseball (1992, with Selleck as an aging jock in Japan), and In & Out (1997, with Selleck as an openly gay TV reporter). Selleck is also a supporter of the National Rifle Association; he was elected to the group’s board of directors for a three-year term in 2008.

Tom Selleck is 6’4″ tall, according to CelebHeights.com… He was an early choice to play Indiana Jones in Raiders of the Lost Ark (1980), but couldn’t get out of his Magnum, P.I. commitment. Harrison Ford got the role instead… Selleck married the former Jacquelyn Ray in 1970; they were divorced in 1982. He married Jilly Joan Mack in 1987, and their daughter Hannah was born in 1988… Tom Selleck “served in the 160th Infantry of the California Army National Guard during the Vietnam era,” according to a 2009 news release from the Vietnam Veterans Memorial Fund, for whom Selleck has served as a spokesman… Thomas Magnum often wore a Detroit Tigers baseball cap — a tribute to Selleck’s real-life hometown.

Something in Common with Tom Selleck