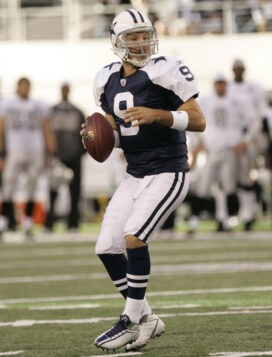 After three years as a backup quarterback and ball-holder for placekicks, Tony Romo replaced struggling starter Drew Bledsoe in the second half of a game in October 2006 and became the Dallas Cowboys’ new star. He remained their starting quarterback until 2015.

Within a year he had led the National Football League in average yards gained per pass (8.6 in 2006), played in his first Pro Bowl all-star game (2007), and received a six-year contract extension worth a reported $67.5 million (October 2007).

With an accurate arm and an ability to scramble, Tony Romo was a standout quarterback in high school in his hometown of Burlington, Wisconsin, and at Eastern Illinois University (1999-2002).

Romo signed as a free agent with Dallas in 2003 after no team selected him in the NFL draft.

In 2006, he became the first Cowboy ever to pass for more than 220 yards in each of his first eight starts at quarterback. The seven-year contract he signed in 2007 ran through the 2013 season, and his contract was extended.

Romo suffered injuries in the 2014 and 2015 seasons and did not start in 2016. After his final play in January of 2017, he retired and joined CBS Sports as a lead NFL analyst, where he earned praise as a commentator.

Tony Romo’s paternal grandfather, Ramiro Romo Sr., immigrated from Mexico to Texas, then moved to Racine, Wisconsin, where he married and raised a family. Tony Romo was born while his father was stationed in California with the U.S. Navy. His parents moved the family back to Wisconsin in 1982. He has two older sisters… In his senior year at Eastern Illinois, Tony Romo won the National Collegiate Athletic Association’s Walter Payton Award as the top player in Division I-AA…. He dated singer Jessica Simpson for more than a year in a much-publicized romance.

Something in Common with Tony Romo