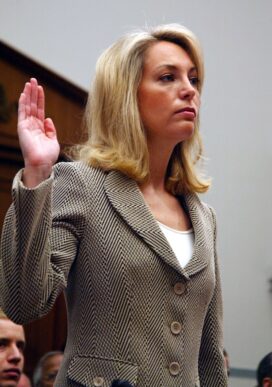 Valerie Plame Wilson is a central figure in a complicated political investigation of the George W. Bush administration. On 14 July 2003, newspaper columnist Robert Novak published a column identifying Valerie Plame as a CIA “operative.” Novak further stated that two unnamed Bush administration officials had told him that Plame had recommended her husband, former U.S. ambassador Joseph Wilson, for a fact-finding trip to Niger in 2002. The trip was to investigate a rumor that Iraqi leader Saddam Hussein had attempted to buy 500 tons of yellowcake uranium from Niger, possibly with intent to build nuclear weapons. Wilson found no evidence of the story. When the U.S.-led invasion of Iraq took place anyway, with President Bush and others claiming that Hussein was building “weapons of mass destruction,” Wilson wrote an opinion piece for The New York Times titled “What I Didn’t Find in Africa,” suggesting that the Bush Administration had twisted intelligence reports to justify the invasion of Iraq. Wilson’s essay was published on 6 July 2003; Novak’s column identifying Plame appeared a week later. Plame had been a “covered” agent of the CIA, working on covert projects, and Novak’s column caused an uproar: it is illegal under federal law to name a covert intelligence agent, and many people believed that the unnamed Bush administration officials had deliberately leaked Plame’s name in an attempt to punish Wilson for his embarrassing public statements. Eventually the Justice Department began an investigation, headed by U.S. Attorney Patrick Fitzgerald, which has continued throughout 2004 and 2005. In July of 2005, Time magazine reporter Matthew Cooper revealed that Bush advisor Karl Rove had discussed Plame with him in the days before Novak’s column appeared, which led to speculation that Rove was one of the two “senior administration officials” who leaked Plame’s identity to Novak.

Plame took the name Valerie Plame Wilson after her marriage to Joseph Wilson in 1998, though she is often still identified as Valerie Plame. It is Plame’s second marriage, Wilson’s third… Plame attended Pennsylvania State University… According to a 2003 article in The New York Times, “People close to Plame said… that she was born in Anchorage, Alaska, while her father, a lieutenant colonel in the air force, was stationed there. The family moved to Huntingdon Valley, Pennsylvania, where Plame attended high school.”

Something in Common with Valerie Plame Wilson