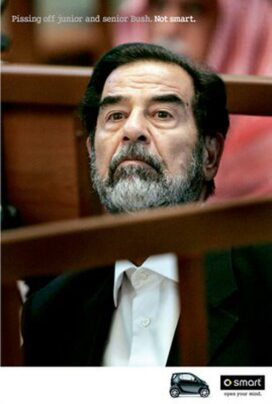 Saddam Hussein was dictator of Iraq from 1979 until 2003, when his regime was overthrown by a United States-led invasion. Saddam Hussein had joined the revolutionary Baath party while he was a university student. He launched his political career in 1958 by assassinating a supporter of Iraqi ruler Abdul-Karim Qassim. Saddam rose in the ranks after a Baath coup, and by 1979 he was Iraq’s president and de facto dictator. He led Iraq through a decade-long war with Iran, and in August of 1990 his forces invaded the neighboring country of Kuwait. A U.S.-led alliance organized by George Bush (the elder) ran Hussein’s forces out of Kuwait in the Gulf War, which ended in February of 1991 with Saddam Hussein still in power. Hussein came under renewed pressure in 2002 from George W. Bush, the son of the first President Bush. Saddam Hussein’s regime was overthrown by an invasion of U.S. and British forces in March of 2003. Hussein disappeared, but U.S. forces captured him on 13 December 2003 after finding him hiding in a small underground pit on a farm near the town of Tikrit. Late in 2005 he went on trial in Iraq for the 1982 deaths of over 140 men in the town of Dujail. On 5 November 2006 he was convicted and sentenced to death by hanging. The sentence was upheld after appeal, and Saddam Hussein was executed by hanging in Baghdad on the morning of 30 December 2006.

Before the 1991 Gulf War, Saddam Hussein threatened that if international forces led by the United States attacked Iraq, it would be “the mother of all wars.” This is the origin of the multi-purpose pop culture catchphrase, “the mother of all (fill in the blank)”… The U.S. effort in the Gulf War was directed by the elder George Bush and the chairman of the Joint Chiefs of Staff, Colin Powell; Powell later became Secretary of State under Bush’s son George W. Bush… Hussein’s sons Uday Hussein and Qusay Hussein were killed by U.S. forces in the northern town of Mosul in July of 2003… Saddam Hussein was no relation to King Hussein, the late ruler of Jordan.

Something in Common with Saddam Hussein