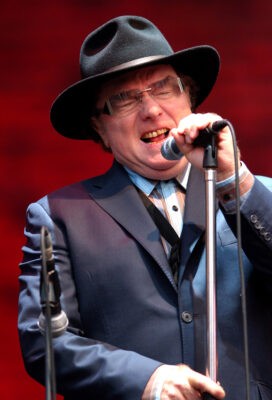 Van Morrison is the Irish troubadour and rock music legend best known for hit songs such as “Brown Eyed Girl” and “Moondance.”

A multi-instrumentalist starting in his teens, Van Morrison had hits in the U.K. and the U.S. in the early ’60s with his band Them, including “Baby Please Don’t Go” and “Gloria.”

He went solo in 1966, and since then Morrison has recorded more than three dozen albums and received honors including induction into the Rock and Roll Hall of Fame (1993) and being awarded the Order of the British Empire (1996) by Queen Elizabeth II.

He’s known for his blend of folk, jazz and blues and his soulful voice, and his best known songs include the 1970s hits “Wild Night,” “Tupelo Honey” and “Domino.”

His albums since the 1980s have been less focused on pop songs and more informed by an interest in his Celtic roots and spiritual themes, but he still has a solid fan base and the critics still call him a genius.

Morrison is famously prickly about the press and the music industry, and he has a reputation for doing his own thing and avoiding publicity about his music.

Van Morrison’s songs have appeared in feature films quite a bit. You can see a list of his soundtrack appearances here… His 2003 album What’s Wrong With This Picture? earned a Grammy nomination for best contemporary jazz album… Morrison’s 1989 song “Have I Told You Lately” was a hit on the adult contemporary charts, and the 1993 version by Rod Stewart was an even bigger hit in both the U.S. and the U.K… In 2022 Morrison was nominated for an Oscar for best original song for “Down to Joy” in the Kenneth Branagh film Belfast.

Something in Common with Van Morrison