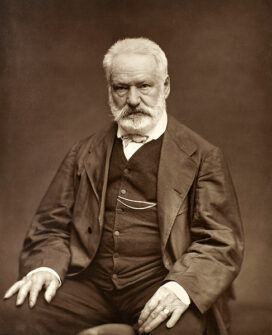 Victor-Marie Hugo was one of France’s most distinguished writers: a poet, dramatist and novelist of the romantic school of the 19th century. His most famous works in English are his two epic novels, The Hunchback of Notre Dame (1831) and Les Misérables (1862), both of which have been adapted many times for stage and screen. Hugo’s name has become synoymous with a certain kind of romantic novel, loaded with passionate emotion and dramatic sweep. An ardent republican in his later years, he was exiled in 1851 after Napoleon III seized power, but returned to France in 1870 in triumph after the emperor fell from power. Hugo’s final years were marked by public veneration, and reportedly over a million people joined his funeral procession after his death in Paris in 1885. He is buried in the Pantheon there.

Something in Common with Victor Hugo