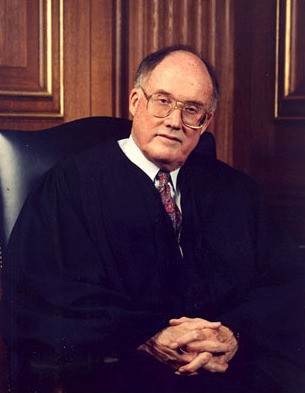 An Interview With William Rehnquist

Change at the Supreme Court

William Hubbs Rehnquist was Chief Justice of the United States from 1986 until his death in 2005.

William Rehnquist was working in a private law practice in Arizona when President Richard Nixon appointed him to a position in the Justice Department in 1969. In 1972 he was confirmed as an Associate Justice on the Supreme Court. President Ronald Reagan nominated Justice Rehnquist to the position of Chief Justice after the retirement of Warren Burger, and he was confirmed by the U.S. Senate in 1986, serving as the head of the Surpreme Court for the next two decades. Among other notable cases, he presided over the 1999 impeachment trial of President Bill Clinton. Rehnquist remained on the court until his death from thyroid cancer during the court’s 2005 summer recess. He was succeeded as Chief Justice by John Roberts.

Justice Rehnquist wrote several books, including All the Laws But One: Civil Liberties in Wartime (1998) and Grand Inquests: The Historic Impeachments of Justice Samuel Chase and President Andrew Johnson (1992).

William Rehnquist’s death left two openings on the Supreme Court: Sandra Day O’Connor had retired earlier in 2005… William Rehnquist served as a weather observer in the Army Air Corps during World War II (1943-46)… He graduated first in his class from Stanford Law School in 1952… John Marshall had the longest term as Chief Justice, serving in the post for 34 years (1801-1835).

Something in Common with William H. Rehnquist