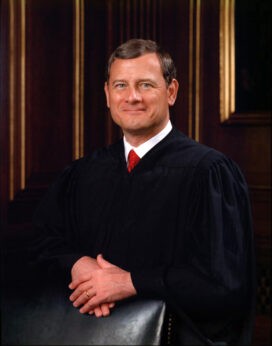 John G. Roberts, Jr. was confirmed as Chief Justice of the United States on 29 September 2005. At the time of his nomination by President George W. Bush, Roberts was a judge on the U.S. Court of Appeals (D.C. Circuit), a position which he assumed in 2003 after also being nominated by President Bush. According to the Washington Post, Roberts “has long been considered one of the Republicans’ heavyweights amid the largely Democratic Washington legal establishment.” He served as a legal aide in the administration of Ronald Reagan, in private practice at the firm of Hogan & Hartson, and was deputy solicitor general in the administration of George Bush the elder from 1989-93. He earned an undergraduate degree from Harvard in 1976, and a degree from Harvard Law School in 1979, after which he clerked for Supreme Court justice (later Chief Justice) William Rehnquist. It was Rehnquist’s death on 3 September 2005 which opened the position of Chief Justice to which Roberts was nominated two days later. Roberts had earlier been nominated by Bush to fill the seat vacated by retiring associate justice Sandra Day O’Connor, but with Rehnquist’s death, Bush shifted the nomination to fill Rehnquist’s seat instead.

John G. Roberts took only three years to complete his undergraduate degree at Harvard… His middle name is Glover… He is married to Jane Marie Sullivan, also a lawyer; they have two children, Josephine and Jack.

Something in Common with John G. Roberts, Jr.