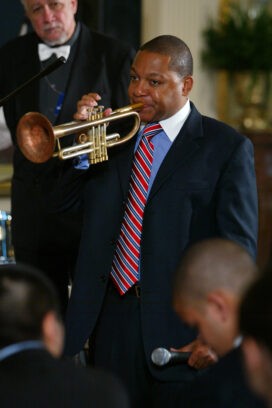 Wynton Marsalis was one of the best-known jazz musicians of the 1980s and 1990s. A trumpet prodigy from New Orleans, Marsalis joined Art Blakey‘s famous band the Jazz Messengers while still a teenager. Throughout the 1980s he led several jazz bands of his own, and then became artistic director of the Jazz at Lincoln Center program in New York. At the same time Marsalis maintained a highly successful classical music career; in 1983 he won both classical and jazz Grammy Awards, becoming the first recording artist ever to accomplish that feat. In 1997 he won the Pulitzer Prize in music for his composition Blood On the Fields. Marsalis’s extreme popularity and outspoken style have made him a somewhat controversial figure in jazz circles; Marsalis is known as a jazz purist, rejecting fusion and “free” jazz in favor of more traditional jazz and bop. This puts him somewhat at odds with his brother Branford, a saxophonist who has played with rock star Sting and once formed a house band for TV’s The Tonight Show.

Other musicians in the Marsalis family include Wynton’s father Ellis Marsalis (piano) and brother Delfeayo (trombone).

Something in Common with Wynton Marsalis