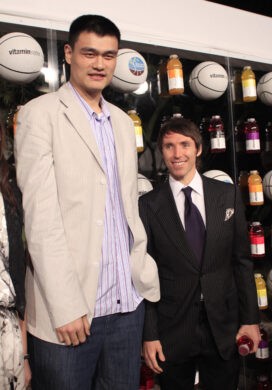 Yao Ming was drafted by the Houston Rockets of the National Basketball Association (NBA) in 2002, and later that year became only the third Chinese national ever to play in the NBA. Yao Ming was already famous, and famously tall: at 7’6″ (2.29 meters) he towered over even most professional players, and he had played for China’s national team in the 2000 Olympic Games and the 2002 FIBA World Championships. He also played five seasons with the Shanghai Sharks of the China Basketball Association. Yao was an All Star eight times in eight NBA seasons, the fans voting him in as a starter despite his injuries in later years. Yao Ming averaged 19 points and just 9.2 rebounds per game over the course of his NBA career. Hobbled by injuries to his feet and legs, he retired at age 30 in 2011.

Yao Ming wore uniform #11… Both of Yao’s parents played for the national basketball teams of China; his mother, Fang Feng Di, is 6’3″ tall and his father Yao Zhi Yuan is 6’7″… Previous Chinese players in the NBA were Wang ZhiZhi, who joined the Dallas Mavericks in 2001, and Mengke (or Menk) Bateer, who joined the Denver Nuggets in 2001… The tallest man in modern recorded history was 8’11” Robert Wadlow.

Something in Common with Yao Ming