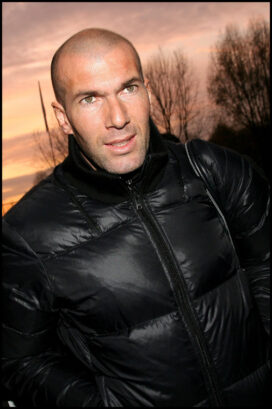 A flashy midfielder, Zinedine Zidane won the Golden Ball as the most valuable player in the World Cups of 1998 and 2006.

Born in Marseille, Zinedine Zidane was signed to the professional club Cannes at age 14. He played his first professional First Division game for Cannes in 1991 and quickly rose through the professional ranks. He sealed his reputation by scoring two goals in the World Cup finals of 1998, helping France defeat Brazil to claim its first-ever World Cup championship.

Zidane played for professional powerhouse Juventus from 1996 until 2001, when he was acquired by Real Madrid for 46 million pounds, a record fee. (By 2003 his teammates on Real Madrid included superstars David Beckham, Luis Figo and Ronaldo, among others.) Zidane was named FIFA player of the year in 1998, 2000, and 2003. He retired from professional soccer after leading France to the finals of the 2006 World Cup.

In 2010 he became a special advisor to the Spanish superclub Real Madrid, and in January of 2016 he took over as Real Madrid’s manager after the mid-season firing of Rafael Benitez. He had great success, with the club winning three consecutive Champions League titles from 2016-2018. But in May of 2018 he announced in a surprise announcement that he would step down as the team’s manager.

Zinedine Zidane’s nickname is “Zizou”… In his final game, the 2006 World Cup final against Italy, Zinedine Zidane was red-carded out of the game for a bizarre headbutt to the chest of Italy’s Marco Materazzi. Italy won the game and the World Cup on penalty kicks after a 1-1 draw. However, Zidane was still named the tournament’s most outstanding player. He claimed he hit Materazzi in retaliation for insults made about Zidane’s mother and sister; in September 2006 Materazzi said he had grabbed Zidane’s shirt during play, causing Zidane to remark that he would give him the shirt if he liked it so much, in turn prompting Materazzi to respond, “I’d rather have your sister.” Materazzi further claimed he didn’t know Zidane had a sister until after the incident.

Something in Common with Zinedine Zidane