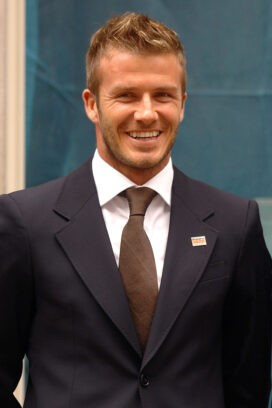 David Beckham is the English footballer whose stardom extends beyond the field and into international celebrity.

David Beckham was already a crowd-pleasing star for Manchester United when he married Spice Girls star Victoria Adams (then known as “Posh Spice”) in July of 1999; the combination of the two heartthrobs proved irresistible to the press and public, and they became one of Britain’s most famous couples.

David Beckham’s fashion-forward haircuts, tattoos and snappy suits were closely observed in the British press. As a player, Beckham became known best for his pinpoint free kicks, slick passing, and spectacular long-range shots (including a famous goal from midfield against Wimbledon in 1996).

David Beckham was disqualified from the 1998 World Cup for a rough foul in England’s loss to Argentina, but returned to play in the 2002 and 2006 World Cups; he was injured before the 2010 event.

Beckham was captain of the English national team from 2000 until 2006, when he stepped down from the role after a loss to Portugal in the World Cup quarterfinals.

On the professional side, Manchester United sold Beckham to the Spanish team Real Madrid in 2003 for a transfer fee of 35 million euros (about 25 million British pounds).

In 2007 he signed a multi-million dollar contract to leave Real Madrid and move to the United States and play for the L.A. Galaxy of Major League Soccer; he first suited up for his new team in a “friendly” match against Chelsea on 21 July 2007. (He also played on extended loan with the Italian team AC Milan in 2009 and 2010.)

Beckham helped the L.A. Galaxy win the MLS Cup in 2011 and then again in 2012, the fifth and final year of his contract with the team.

He played a season with the French team Paris Saint-Germain before announcing his retirement from football on May 16, 2013.

David Beckham typically played midfield… His popular nickname is “Becks”… He has four children with Victoria Beckham: sons Brooklyn (born 4 March 1999), Romeo (b. 1 September 2002), and Cruz (b. 20 February 2005), and daughter Harper Seven (b. 10 July 2011)… David Beckham wore uniform number 7 with Manchester United; upon joining Real Madrid he switched to number 23, with 7 already taken by his teammate Raul; he kept the jersey number with the Galaxy, and took 32 with AC Milan… His Real Madrid teammates included Luis Figo, Ronaldo and Zinedine Zidane… The 2002 film Bend It Like Beckham (starring Keira Knightley) was a fictional tale about a soccer-loving teenager. Beckham didn’t star in the movie, but the title has become synonymous with his name. The title refers to Beckham’s skill at curling shots around defenders.

Something in Common with David Beckham