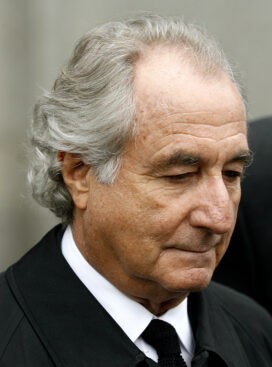 Bernard Madoff was the investment manager who defrauded investors of up to $50 billion in what may have been the largest swindle in Wall Street history.

Bernard Madoff was, at the time of his arrest, a Wall Street legend who had run an investment business for nearly 50 years. According to the story Madoff told others, in 1960, at age 22, he took $5000 earned from his summer job as a Long Island lifeguard and started his own investment firm. His brother Peter Madoff joined him in 1970 in what had become a booming business with an impressive list of clients.

Madoff’s firm grew famous for its outstanding annual returns of 10% or more, even when others in the market suffered down years. He became a stalwart of finance, serving as president of the board of directors of the NASDAQ stock exchange. He and his wife Ruth were popular socialites in New York and Florida, where they were members of the exclusive Palm Beach Country Club.

But it was all too good to be true. On December 11, 2008, FBI agents arrested Bernard Madoff at his Manhattan apartment, and the Securities and Exchange Commission said he was charged with “massive fraud” and running a “multi-billion dollar Ponzi scheme” in which he used money from new investors to pay returns to others. Madoff reportedly admitted to investigators that he had lost $50 billion of investors’ cash.

Bernard Madoff pled guilty to 11 felony counts on March 12, 2009, and on June 29, 2009 he was was sentenced to the maximum penalty: 150 years in prison. He died in prison, passing away in a federal prison hospital in Butner, North Carolina in 2021.

The formal name of Bernie Madoff’s company was Bernard L. Madoff Investment Securities LLC….He was turned in by his sons Mark and Andrew, who were partners in his firm. Mark Madoff committed suicide by hanging himself with a dog leash on December 11, 2010, two years to the day after his father’s arrest… According to the U.S. Department of Justice, the 11 felony charges to which Bernie Madoff pled guilty were “securities fraud, investment adviser fraud, mail fraud, wire fraud, three counts of money laundering, false statements, perjury, false filings with the United States Securities and Exchange Commission (“SEC”), and theft from an employee benefit plan”… Carlo Ponzi was an Italian immigrant who bilked millions of dollars from investors in the 1920s; in a Ponzi scheme, older investors are paid off with money from new investors… Bernard Madoff was played by Robert DeNiro in the 2017 TV movie The Wizard of Lies.

Something in Common with Bernard Madoff