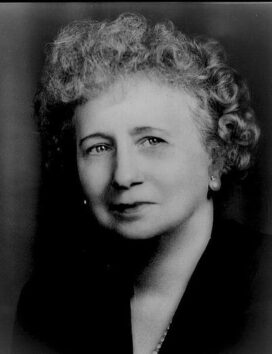 Elizabeth “Bess” Truman was the wife of United States president Harry S. Truman. She was the First Lady from 1945 until 1953, when she retired to live in her hometown of Independence, Missouri. Bess and Harry knew each other as kids and graduated from high school in the same class (1901). After her father committed suicide in 1903, Bess followed her mother and three brothers to her maternal grandfather’s house in Independence. She married Harry Truman in 1919, after a long courtship and engagement that survived Harry’s service in Europe during World War I. When he got into politics, Bess supported and advised him, and she was a paid staff member when he served as a U.S. senator. When Franklin Roosevelt died in 1945, vice president Truman was sworn in and Bess began her duties as the First Lady. Unlike her predecessor Eleanor Roosevelt, Bess worked at keeping out of the public eye — the most memorable thing about her time as the First Lady of the United States is how little there is to remember. She oversaw the three-year renovation of the White House and observed all the formal social protocols, but preferred a life of privacy. When the Trumans retired they moved back to her family home in Independence, where she spent the remainder of her life. Harry died in 1972, and Bess lived on another ten years.

Their only child, Mary Margaret (Truman) Daniel, is a New York writer who has written biographies of her parents as well as a successful series of murder mysteries (under the name Margaret Truman).

Something in Common with Bess Truman