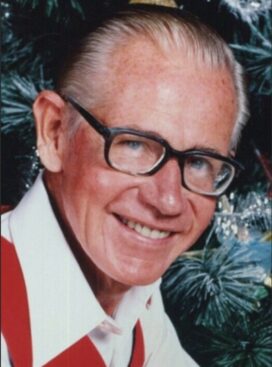 Bil Keane was the creator of The Family Circus, a newspaper comic that first appeared in February of 1960.

Bil Keane was a self-taught cartoonist who grew up around Philadelphia and began drawing while in high school. After a stint in the U.S. Army (1942-45), he and his Australian wife Thel settled in Philadelphia.

Keane worked as the staff cartoonist for the Philadelphia Bulletin, where he created the strips Silly Philly (1954-61) and Channel Chuckles (1954-65).

The strip was a daily dose of family life that mirrored Keane’s real life, although he and Thel had five children and the couple in the strip have only four: Billy, Jeffy, Dolly and P.J.

The syndicated strip was in more than 1500 newspapers at its peak, and has been a consistently popular daily feature for more than 50 years.

Keane’s son Jeff began helping with the strip in 1981, and by the time of Bil Keane’s death in 2011 he had taken over the daily duties of the strip.

Bil Keane married Thelma Carne in Brisbane in 1948 and they were together until her death in 2008… Thel is the model for Mommy in The Family Circus, and Keane’s daughter Gayle is the model for Dolly; Keane’s son Jeff is the model for Jeffy, and his son Glen is the model for Billy… Glen Keane is an animator for Walt Disney Studios, and he designed and animated Ariel, the title character from 1989’s The Little Mermaid… Bil Keane was good friends with Charles Schulz, the creator of Peanuts.

Something in Common with Bil Keane