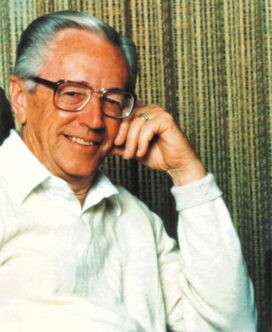 By all accounts a shy child while growing up in Minnesota, Charles Schulz took a correspondence art course, served in the U.S. Army during WWII, and then doggedly pursued a career as a cartoonist. His Minneapolis comic panel Li’l Folks was renamed Peanuts and syndicated nationwide in 1950.

By the mid-1960s it had become one of the best-known cartoon strips in the world. Schulz’s characters, including the wishy-washy Charlie Brown and his fantastical dog Snoopy, also starred in a popular series of holiday TV specials and in the stage show You’re A Good Man, Charlie Brown.

Late in 1999 Schulz announced he had colon cancer and would retire after nearly 50 years of drawing Peanuts. He died on February 12, 2000, one day before his final Sunday strip appeared. Schulz did not pass the strip to another artist, but many newspapers continue to publish daily reruns of Schulz’s past Peanuts strips.

Music for many of the Peanuts TV specials was composed by Vince Guaraldi… Other Peanuts characters included the crabby Lucy and her blanket-toting brother Linus, tomboy Peppermint Patty and her friend Marcie, Snoopy’s bird friend Woodstock, and the Beethoven-loving Schroeder… Charles Schulz was married to the former Joyce Halverson from 1951 until their divorce in 1972. He married Jean Forsyth Clyde in 1973, and they remained married until Schulz’s death… Charles Schulz’s nickname was ‘Sparky.’

Something in Common with Charles Schulz