Bil Keane, the creator of The Family Circus, died yesterday from heart failure.

The daily comic strip The Family Circus has been around since 1960. I’ve never liked it much, but I read it every day and have for many years.  Assuming it takes approximately four seconds to read, I figure I’ve spent more than 50,000 seconds wincing at Bil Keane‘s overly sentimental or non-existent jokes. I’m using the 50,000 number because it sounds so much more dramatic than “about 14 hours.”

I’ve also probably spent about 25,000 seconds defacing and re-captioning The Family Circus, a silly habit I developed around 1979 or so, well in advance of the internet and its The Dysfunctional Family Circus (look it up). Like that long-ago parody, many of those doctored strips ended up (somehow) using foul language and crude humor.

But not this one: 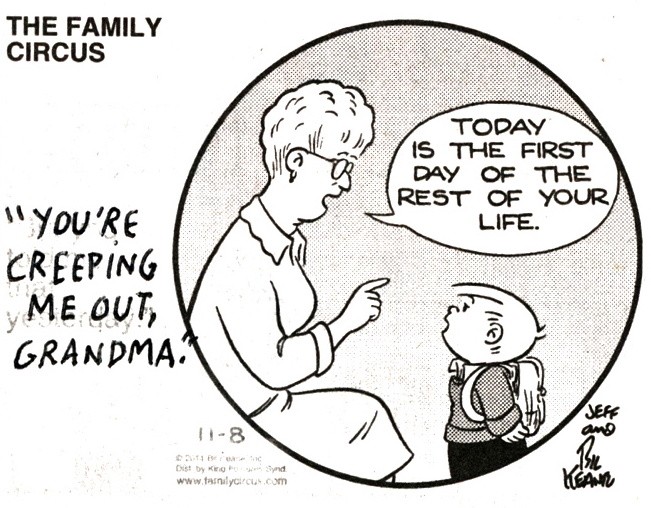 The above strip appeared yesterday, the day Bil Keane died. Spooky, right? And not just the irony of the “rest of your life” bit, but the fact that it’s Grandma saying it.

Because anyone who reads The Family Circus knows that after you die you hang out in a cloud-puff version of Heaven, perpetually semi-invisible and at the same age you were when you died. And all day long you peer down at the living to see what they are up to. Any time of the day or night. No matter what they’re up to. Even when they don’t want you to see.  Does that not sound like Heaven?

And that means Bil Keane is up there right now, watching you.

My lack of enthusiasm for the strip does not mean I don’t give Bil Keane props. It’s quite a task to crank out a daily comic strip. Just ask Garry Trudeau, who took a sabbatical from Doonesbury, or Bill Amend, who stopped doing daily versions of FoxTrot, or Bill Watterson and Gary Larson, who up and quit doing their strips (Calvin and Hobbes and The Far Side).

Bil Keane just kept going. Yes, he had help from his son Jeff (who will probably take over the strip), but Bil kept drawing the strip right up until he expired (Jeff inked and colored it). That’s dedication I can admire.

So I salute Bil Keane. And, as Dolly would say, he’ll be in my “knee-mail” to God tonight.

To read more, go to the Who2 biography of Bil Keane.

To read what other cartoonists have to say about Keane, read the blog at the Washington Post.

And for an older, charming interview from a generation ago, read this reprint from a fan.