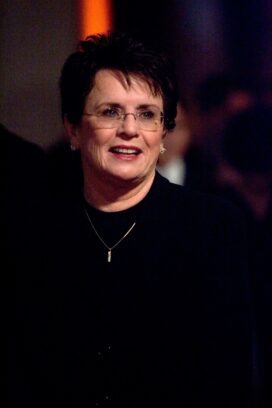 Billie Jean King won 39 Grand Slam tennis titles in her career and dominated women’s tennis for more than a decade in the 1960s and 1970s.

Billie Jean King won her first Wimbledon title in 1966, beating top-seeded Margaret Court Smith in the semis, and went on to win a total of 20 Wimbledon titles: six in singles, 10 in doubles, and four in mixed doubles.

In 1973 she played men’s player Bobby Riggs, who had publicly proclaimed no woman could beat him. (The previous year he had beaten Margaret Court Smith, then known as Margaret Court.)

The King-Riggs match was dubbed “The Battle of the Sexes” and played at the Houston Astrodome, and when King trounced Riggs in straight sets — 6-4, 6-3, 6-3 — she became a feminist icon.

She also had some memorable matches with Chris Evert and Martina Navratilova, who became her leading challengers in the 1970s.

Since retiring, Billie Jean King has worked as a coach, television commentator and businesswoman, and has been a spokesperson for gay and lesbian rights.

King was awarded the Presidential Medal of Freedom by President Barack Obama in 2009.

Billie Jean King was played by Emma Stone in the 2017 feature film Battle of the Sexes, recounting her famous match with Bobby Riggs. Steve Carell played Riggs… Billie Jean King’s longtime secretary, Marilyn Barnett, brought a palimony lawsuit against her in 1981 and their love affair became public. King won the suit… She was married to Lawrence (Larry) King from 1965 until their divorce in 1987. They had no children. He is no relation to TV personality Larry King.

Something in Common with Billie Jean King