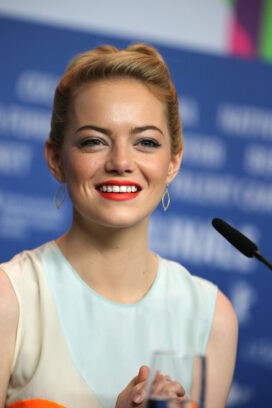 Actress Emma Stone was best known for her star performance in the 2010 comedy Easy A — up until she won the Oscar for best actress in 2016’s La La Land.

She got her big break in the movies as the wide-smiling redhead who enchants Jonah Hill in the 2007 comedy Superbad, and went on to prove herself as a leading comic actress.

A native of Arizona, Stone got her first experience with Hollywood in the VH1 reality show In Search of the Partridge Family (2004); she won the role of Laurie Partridge and appeared in a TV movie, The New Partridge Family, in 2005.

Her brief comic work in Superbad led to parts in other features, including The House Bunny (2008), Zombieland (2009, with Abigail Breslin) and The Help (2011, with Jessica Chastain and Allison Janney).

Emma Stone’s other films include The Amazing Spider-Man (2012, starring Andrew Garfield) and its sequel (2014), Birdman or (The Unexpected Virtue of Ignorance) (2014, starring Michael Keaton), La La Land (2016, with Ryan Gosling) and Battle of the Sexes (2017, with Stone as tennis star Billie Jean King).

Something in Common with Emma Stone