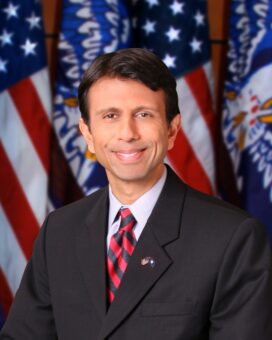 Bobby Jindal was governor of Louisiana from 2008-16, becoming the first-ever Indian-American governor of an American state.

A conservative with special expertise in public health, Bobby Jindal was regarded early in his career as a rising star in the national Republican Party; radio commentator Rush Limbaugh once called him “the next Ronald Reagan.” Bobby Jindal grew up in Baton Rouge and went to Brown University, where he earned degrees in public policy and biology in 1992. He attended Oxford as a Rhodes Scholar, earning a Master of Letters degree (M.Litt.) in 1994, and worked briefly as a consultant for McKinsey and Company.

Bobby Jindal was only 24 when he was appointed Secretary of the Louisiana Department of Health and Hospitals in 1996. Five years later he was appointed Assistant Secretary for the U.S. Department of Health and Human Services by George W. Bush, serving from 2001-03. He was elected to Congress from Louisiana’s First District in 2004, and reelected in 2006. He was elected governor of Louisiana in 2007 and was sworn in on 14 January 2008; later that year he was widely discussed as a potential vice-presidential candidate for John McCain (a role that went instead to Sarah Palin).

Bobby Jindal was reelected for a second four-year term as governor in 2011. He ran for the GOP nomination for U.S. president in 2015, announcing his candidacy on June 24th but then dropping out on November 17th, saying “I’ve come to the realization that this is not my time.” He left office at the end of his second term in 2016; Louisiana limits governors to two consecutive terms. He was succeeded by Democrats John Bel Edwards.

Bobby Jindal married his wife, Supriya, in 1997. She was born in Metairie, Louisiana and went to high school with Jindal in Baton Rouge, but they didn’t begin dating until 1996. They have a daughter, Selia, and two sons, Shaan and Slade… Bobby Jindal’s parents emigrated from India to the U.S. in 1970. His parents are Hindu; Jindal converted to Catholicism in high school… Bobby Jindal also ran for governor of Louisiana in 2003, losing in a runoff to Democrat Kathleen Blanco… His legal first name is Piyush but he took the nickname Bobby as a child. He told CBS News in 2009, “Every day after school, I’d come home and I’d watch The Brady Bunch. And I identified with Bobby, you know? He was about my age, and Bobby stuck.”

Something in Common with Bobby Jindal