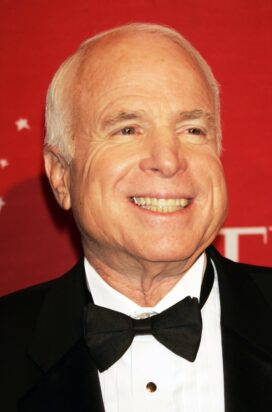 John McCain was a U.S. senator from Arizona from 1987 until his death in 2018. He was the Republican nominee for president in 2008.

A 1958 graduate of the U.S. Naval Academy, John McCain had a 22-year military career as a pilot and officer in the Navy. Five of those years (1967-73) were spent in a Vietnamese prisoner of war camp after he was shot down over Hanoi during the Vietnam War.

John McCain left the Navy in 1981, was elected to Congress in 1982, and then was elected as U.S. senator from Arizona in 1986. In 2000 he ran for the Republican presidential nomination, but was defeated by George W. Bush. After Bush was reelected in 2004, McCain ran again for the Republican nomination in 2008, this time winning the nomination at the GOP convention. He named Alaska Governor Sarah Palin as his running mate, but they were defeated by Democratic candidates Barack Obama and Joe Biden.

In 2017, McCain announced that he was being treated for a glioblastoma, a form of brain cancer which had been discovered during eye surgery that July. He died of the disease on August 25, 2018.

John McCain’s father and grandfather were both four-star admirals in the U.S. Navy… He had surgery to remove melanomas (skin lesions) in 1993 and 2000 and minor prostate surgery in 2001… John McCain was married to the former Carol Shepp from 1965-1980. A month after their divorce, he married Cindy Hensley, the daughter of a prominent Arizona liquor distributor. He has seven children: sons Doug Shepp and Andy Shepp (adopted during his marriage to their mother, Carol Shepp), Sydney McCain (his daughter with Carol Shepp), and Meghan McCain, John Sidney McCain IV, James McCain, and Bridget McCain, all with Cindy McCain. Bridget McCain was born in Bangladesh and adopted in 1993 by the McCains.

Something in Common with John McCain