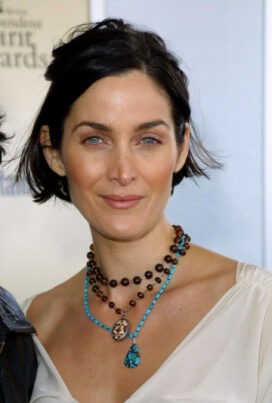 Carrie-Anne Moss played tough and tender Trinity in the Matrix movie series, starting with The Matrix (1999, with Keanu Reeves).

A native of British Columbia, Carrie-Anne Moss broke into the entertainment business as a model. Work in Europe led to a TV role in 1991’s Dark Justice, an American television series produced in Spain. The production relocated to Los Angeles and Moss followed, subsequently working on stage and in television until being cast in The Matrix as Trinity, the sleek tutor, fellow freedom-fighter, and lover to Reeve’s heroic Neo.

In 2000, Moss appeared in three other high-profile movies, Red Planet (co-starring Benjamin Bratt), Memento, and Chocolat (starring Juliette Binoche). She also starred in the sequels The Matrix Reloaded (2003) and The Matrix Revolutions (also 2003), and returned to the role again nearly two decades later in The Matrix Resurrections (2021).

Moss jumped into series television in 2012, co-starring in Vegas with Dennis Quaid and Michael Chiklis from 2012-13. She began playing attorney-to-the-superhoroes Jeri Hogarth on the Netflix series Jessica Jones (2015-2019), and played the character again in other Marvel-based Netflix shows like Daredevil (2016) and Iron Fist (2017).

Something in Common with Carrie-Anne Moss