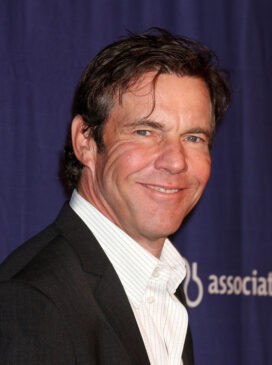 Lean and a bit craggy with an aw-shucks grin, actor Dennis Quaid has often played rascals with good hearts and soft heads. His most prominent early role was that of cocky astronaut Gordon Cooper in the 1983 film The Right Stuff. Ever-youthful and athletic, Dennis Quaid turned into a sturdy leading man and dependable ensemble actor. He has appeared as a stranded astronaut in Enemy Mine (1985); as Jerry Lee Lewis in Great Balls of Fire! (1989, with Winona Ryder); as nihilistic ol’ Doc Holliday in the western feature Wyatt Earp (1994, starring Kevin Costner); as Lindsay Lohan‘s befuddled dad in The Parent Trap (1998); as Jake Gyllenhaal‘s overprotective dad in The Day After Tomorrow (2004); as Jim Caviezel‘s time-warped dad in Frequency (2000); as a shady lawyer in Traffic (2000, directed by Stephen Soderbergh); as plucky comeback pitcher Jim Morris in the 2002 biopic The Rookie; as Julianne Moore‘s gay husband in Far From Heaven (2002); as Sam Houston in The Alamo (2004); as an embittered literature professor in Smart People (2008, with Ellen Page); and as the sinewy General Hawk in G.I. Joe: The Rise of Cobra (2009, with Sienna Miller). Dennis Quaid tried his hand at series television in 2012, starring with Carrie-Anne Moss and Michael Chiklis in Vegas.

Dennis Quaid is the younger brother of actor Randy Quaid… Dennis Quaid married actress Meg Ryan in 1991; the pair divorced in 2001. They have one son, Jack Henry… He married Texas realtor Kimberly Buffington in 2004, and they had twins, Thomas Boone and Zoe Grace, in November of 2007. They separated in 2012 and Quaid filed for divorce in December of that year.. Dennis Quaid was also previously married to actress P.J. Soles from 1978-83; they had no children.

Something in Common with Dennis Quaid