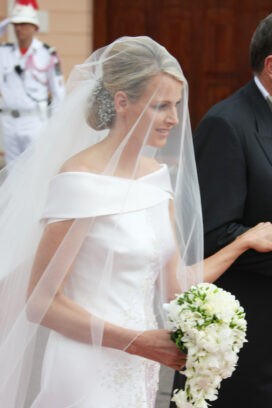 Princess Charlene of Monaco is the former Olympic swimmer who married Prince Albert of Monaco in July of 2011.

A statuesque blonde, she was born Charlene Wittstock in Zimbabwe. She began swimming as a youngster, and won national titles in the backstroke. She was part of the South African women’s 4×100 medley relay team that finished fifth at the 2000 summer Olympics in Sydney, Australia.

That same year she met Prince Albert while in Monaco for a swimming competition. Charlene Wittstock was 22 and Prince Albert was 42, but in the next few years a romance began. After 2002 her swimming career was cut short by a shoulder injury, and in 2006 she moved to Monaco and became the steady consort of Prince Albert, long regarded as one of Europe’s most eligible bachelors.

The royal palace of Monaco announced on 23 June 2010 that Charlene Wittstock and Prince Albert had become engaged to be married. The wedding took place in July of 2011, with a civil marriage ceremony on July 1st, followed by a Catholic ceremony on July 2nd. She then became known as Princess Charlene of Monaco.

Princess Charlene is 5’10” tall, according to People magazine… The marriage is the first for both Charlene Wittstock and Prince Albert; the prince has two children out of wedlock from previous relationships… Princess Charlene’s hometown, Bulwayo, is the second-largest city in Zimbabwe, with a population of over one million… The Monaco Palace announced the following upon the birth of her twins in 2014: “The Prince Jacques, Honoré, Rainier is the crown prince. In accordance with the historic custom established by the treaty of Péronne (1641), He shall receive the title of Marquis of Baux (in Provence). The Princess Gabriella, Thérèse, Marie, second child in the line of succession, shall receive the title of countess of Carladès (in Auvergne).”