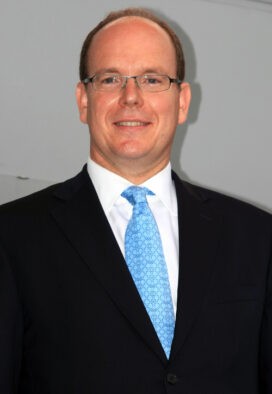 Prince Albert became ruler of Monaco in a formal ceremony on November 18, 2005, following the death of his father Prince Rainier III in April of that year.

Prince Albert is the son of Rainier and Princess Grace (the former Hollywood star Grace Kelly), and as their only son he became heir to the throne. Albert has two sisters: Princess Caroline (b. 1957) and Princess Stephanie (b. 1965). Prince Albert attended Amherst College in Massachusetts from 1977-81, earning a bachelor’s degree in political science. A dedicated sportsman as an adult, he formed a Monaco national bobsled team in 1986 and competed in five straight Olympic games from 1988 in Calgary through 2002 in Salt Lake City.

Prince Albert assumed royal powers on the death of his father, and was sworn in as Monaco’s head of state on July 12, 2005. That same month, Albert admitted publicly that he was the father of a two-year-old son born out of wedlock to Nicole Coste, a flight attendant the prince had met on an Air France flight in 1997. In 2006 Prince Albert admitted he also had a daughter, the result of a romantic liaison with an American waitress, Tamara Rotolo, in 1991. Still, Albert remained unmarried into his 50s and was long considered one of Europe’s most eligible bachelors.

But in 2010, Albert announced that he had become engaged to his longtime girlfriend, former South African Olympic swimmer Charlene Wittstock. The couple married in a civil ceremony on July 1, 2011, followed by a Catholic ceremony on 2 July 2011, with his wife becoming known as H.S.H. Princess Charlene.

Prince Albert’s son with Coste, named Alexandre, was born in August of 2003. His child with Rotolo, named Jazmin Grace, was born on March 4, 1992. Neither child is in line for the throne of Monaco, as the principality’s constitution states that only “direct and legitimate” descendants are considered legal royal heirs… Albert’s great-great-grandfather was Prince Albert I of Monaco (1848-1922), who founded Monaco’s famed Oceanographic Institute… Still another royal Albert is Prince Albert (1819-1861), the consort of Britain’s Queen Victoria.

Something in Common with Prince Albert of Monaco