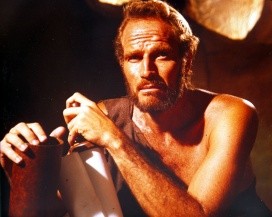 Charlton Heston’s starring roles in epics like The Ten Commandments (1956) and Ben-Hur (1959) made him one of the biggest movie stars of the 1950s.

Heston specialized in playing rugged he-men who also had a sensitive and thoughtful side. The biblical story The Ten Commandments starred Heston as a powerful Moses. The slaves-and-gladiators epic Ben-Hur won Heston an Oscar as best actor.

Charlton Heston remained a box-office draw in adventures and westerns through the 1960s and ’70s, as he starred in films like the sci-fi hit Planet of the Apes (1968, with Roddy McDowall), Will Penny (1968) and the WWII naval spectacular Midway (1976, with Henry Fonda). Heston also played legendary detective Sherlock Holmes onstage in Crucifer of Blood (1981 at the Los Angeles Musical Theater) and on TV in the same story in 1991.

In later years Heston applied his rugged good looks and dignified manner to conservative political causes; most notably, he became president of the National Rifle Association. Heston announced in August of 2002 that he had early symptoms of Alzheimer’s Disease. He finished his NRA term in April of 2003, and made no further public appearances until his death in 2008.

Something in Common with Charlton Heston