Do you like Ray Bradbury enough to read this weird piece that somehow screws Ray Bradbury’s work into a political screed? I do.

The article is called “Revenge of the Nerd,” and it’s in The American Conservative. My guess is the author wanted to write about Ray Bradbury, but felt compelled to put a political spin on it because his magazine is, after all, about politics.

It puts writer Ray Bradbury in terms of the classic film Revenge of the Nerds (here I am using the term “classic” as you would with your best friend — like when she knocks over her beer and you say “CLASSIC!!”). In case you haven’t seen the film, that means it depicts Ray as a kid who got rough treatment from the in-crowd, but wins in the end.

That is, Bradbury didn’t get the respect of the literati in the old days, but now he does. He’s sold millions of books, won awards, been talked about in universities, etc. Even better, he’s still writing stories and he’s in his 90s.

That hook’s good as far as it goes, but the piece wanders around trying to make some kind of political point. Bradbury liked Charlton Heston and Ronald Reagan, and is a “born again Republican.” He came to that position well after writing his most famous books, including Fahrenheit 451 (1953), but this piece argues the conservative strain was always there in his work.

And that liberals are stupid for liking Ray Bradbury books, because Ray Bradbury is really a conservative. The author of the article, Daniel J. Flynn, says readers who think moralists are the “target” in Fahrenheit 451 are “cultural anarchists” who have “clouded the conservative message” of the book.

That’s an interesting take to folks who see everything in terms of left and right politics, but what I found interesting is the discussion of Bradbury’s work as a frightened view of the future, and Bradbury’s apparent longing for the good old days, as manifested in his dislike of modern technology. He never had a driver’s license, didn’t fly in a plane until his “seventh decade” (I think that means “in his 60s”) and he certainly doesn’t have a computer. I liked the personal details about Bradbury that this article offers in this regard. Bradbury still writes — by dictating over the phone to one of his daughters. Naturally, no email for him, but he’ll use a fax machine.

I liked hearing that as a kid, Bradbury was an autograph hound in Hollywood. And that he typed the first draft of Fahrenheit 451 on a coin-operated typewriter at the University of California at Los Angeles, and it cost him $9.80.

I didn’t like hearing that he didn’t get along with Rod Serling.

If you absolutely hate politics, don’t read the article. 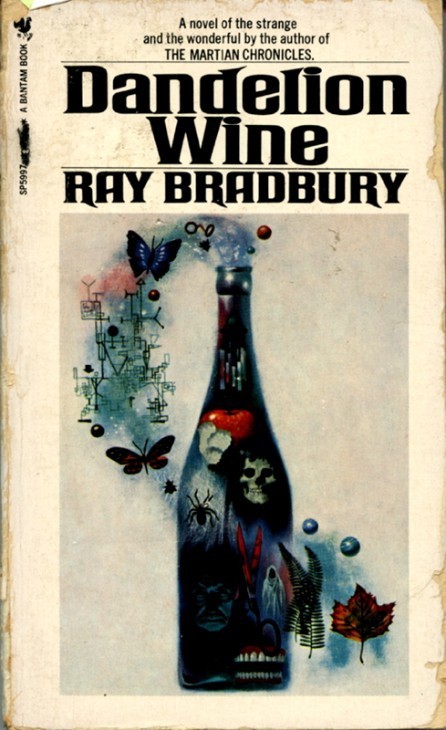 (Yes, that’s my copy of Dandelion Wine in the photo.)