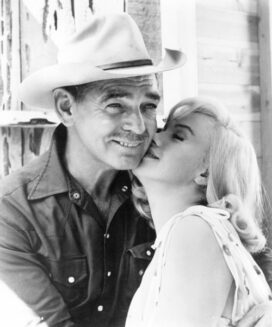 Clark Gable was a popular leading man in the movies for nearly thirty years. His big ears and cocky grin helped define his screen persona as a rascal, most famously in It Happened One Night (1934, directed by Frank Capra). His stature as a romantic hero was cemented as Rhett Butler, opposite Vivien Leigh in Gone With the Wind (1939). Off-screen, he had a famous tragic romance with actress Carole Lombard, who was killed in a plane wreck in 1942. At the age of 41 Gable enlisted in the U.S. Army Air Corps, serving in World War II and eventually reaching the rank of Major.

Gable’s last film, 1961’s The Misfits, was also the final film of Marilyn Monroe and the antepenultimate film of co-star Montgomery Clift.

Something in Common with Clark Gable