Did actor John Wayne dodge military service in World War II, or was he a heroic patriot who somehow couldn’t quite get into the fight?

The argument continues, as seen in this new public defense of John Wayne, courtesy of the politically conservative site Breitbart.com. The article is based on an application John Wayne apparently filed in 1943, hoping to get into Office of Strategic Services photo unit of director John Ford. Money quote:

Here for the first time is the first hard evidence that [John] Wayne volunteered for potentially dangerous service with the equivalent of today’s C.I.A., and the papers are not out of someone’s attic, but official government documents.

For context, let’s go over the basics again. John Wayne never joined the Army or Navy. Instead, he spent the war years making movies in Hollywood and doing USO tours. His fans say that John Wayne tried to join up but had a bad knee or a bad back, was deferred because he had a family, and so on. There are a number of possible excuses.

It’s highly debatable whether getting into John Ford’s photo unit would equal “potentially dangerous service with the equivalent of today’s C.I.A.,” but let’s just grant that it was. (Ford started out producing military documentaries and training films, and his units later followed the Allied advance across Europe, filming “installations, topography, and combat operations.”)

Whatever that service would have been, this new argument, like so many others, still misses the point — which is that even if he was rejected in this case (or others), John Wayne could still have patriotically signed up as a soldier or sailor at any time. He didn’t. 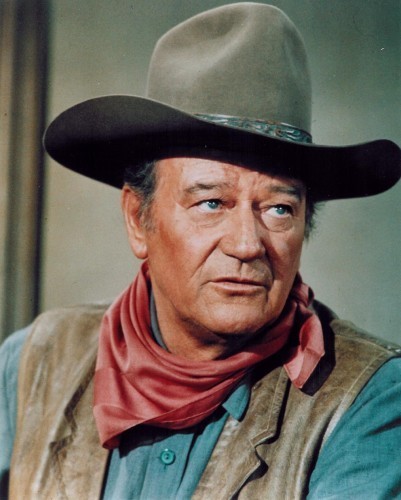 In fact, the Breitbart article itself notes that point:

“By 1943, with officer’s slots all filled, the only way Wayne could have gone into the service was as an army private; he had waited too long. Years later Wayne told Dan Ford that as a private, ‘I felt it would be a waste of time to spend two years picking up cigarette butts. I thought I could do more for the war effort by staying in Hollywood.'”

“Two years picking up cigarette butts” is a pretty cold quote about the contributions of Army privates, isn’t it?  Would any Hollywood actor (or politician) today get away with describing Army service during the Iraq or Afghanistan wars as “two years picking up cigarette butts”? If Wayne thought he could help the war effort by making movies, he was also choosing the cushiest possible job, one that would give him the chance to break through as a star while other actors were out fighting the war.

Clark Gable, for instance, was at the time a far bigger star than Wayne (and at age 41, six years older). Yet Gable enlisted in the Army as a private in 1942, even though he was beyond draft age. Gable also could have decided he would do more for the war effort by staying in sunny Hollywood, but he didn’t.

Some of the stories offered in John Wayne’s defense in the Breitbart article just seem silly:

“Dan Ford recalled that Wayne told him he had been approved by O.S.S. commander William Donovan to join the Field Photographic Unit, but that the letter went to his estranged wife Josephine’s home and she never told him about it.”

Gee, John Wayne would have fought in World War II, if only that one letter had been forwarded. Too bad the military just couldn’t find another way to contact this prominent movie star. Too bad Wayne just couldn’t figure out how to get into the fight himself.

But the point isn’t really to knock Wayne.  I like many of his movies, especially those old beauties with Ford. And “draft dodger” isn’t the right term anyway — it’s not like he fled the draft board and hid out. He just didn’t sign up to fight.

The point that does matter to me is the historical one, which is that the loudest “patriots” and the strongest voices in favor of war are often people who avoided fighting one when they had the chance. Dick Cheney is only the latest example, with his infamous “I had other priorities in the ’60s than military service” statement about avoiding the Vietnam War. We should be skeptical of those voices.

John Wayne is another good example of that idea. He later became a big supporter of the Vietnam War, even directing the 1968 film The Green Berets, in which a skeptical anti-war reporter is shown The Truth by Wayne’s tough-guy Col. Kirby. No doubt John Wayne did feel strongly about the Vietnam War. But by then, he was also safely past fighting age.

Lots of guys his age with bad knees and families made their way into the fighting in World War II, if they were determined enough. John Wayne could have enlisted, too, and didn’t. This latest document doesn’t change that. In fact, it makes it all the clearer.