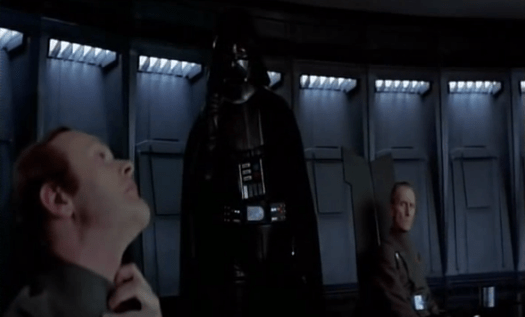 We all have to go sometime, but some have better epitaphs than other.

Richard LeParmentier, who died this week at age 66, had “the distinction of being the first actor telekinetically throttled by Darth Vader.”

That’s according to the official Star Wars site.  LeParmentier played Admiral Motti in the original Star Wars — the Death Star commander who heckles The Force until Darth Vader chokes him from across the room. The full exchange went like this:

Admiral Motti: “Don’t try to frighten us with your sorcerer’s ways, Lord Vader. Your sad devotion to that ancient religion has not helped you conjure up the stolen data tapes, or given you clairvoyance enough to find the rebels’ hidden fortr–“
Darth Vader (choking him mentally): “I find your lack of faith disturbing.”

Ha! Here’s the clip:
Richard LeParmentier turned 31 in 1977, the year Star Wars came out. He had actually read for a much bigger role in the film:

LeParmentier was one of the many actors who read for the part of Han Solo, but he was originally hired to play a Mos Eisley bureaucrat named Montross. Just prior to the start of production of Star Wars, this small part was cut from the film. “Then about a month later,” LeParmentier told Star Wars Insider magazine in 1998, “the casting director phoned my agent and said, ‘We’d like Richard to read for the part of Admiral Motti,’ so they sent me another script and I read it, and I thought, ‘Well, okay, it’s two scenes at least, so I’ll do that.'”

Well, he made the most of his moment. Happy trails, Mr. LaParmentier, wherever you may be.
See our biography of Darth Vader »