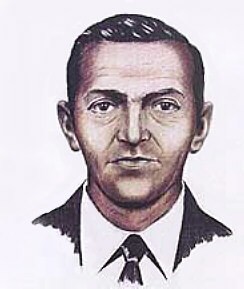 Born: ?
Birthplace: ?
Best known as: The parachuting skyjacker who maybe got away

D.B. Cooper is the world’s most famous jumping skyjacker, and his ultimate fate remains a popular question for fans of famous crimes.

The mysterious middle-aged passenger, who bought a ticket using the name Dan Cooper, boarded a Northwest Orient flight in Portland, Oregon on November 24, 1971 — the eve of Thanksgiving. (Though the hijacker called himself Dan Cooper, a news reporter later heard an investigator mention a “D.B. Cooper,” and the initials stuck.) One aloft, Cooper threatened to blow up the plane (a Boeing 727) and demanded he be given $200,000 and four parachutes. After the plane landed at Seattle-Tacoma Airport and his demands were met, Cooper ordered the pilot to take off and head for Mexico, flying at a relatively low 10,000 feet.

The Boeing 727 had an unusual stairway that dropped open from the center rear of the plane. Somewhere over Washington state, Cooper lowered the stairway and then jumped into darkness, taking the cash with him. Despite exhaustive searches in the days and months that followed, D.B. Cooper was not found, alive or dead. It’s unclear whether Cooper survived the jump and his fate and whereabouts are still unknown.

In 1980, an eight-year-old boy named Brian Ingram dug up a bundle of $20 bills in the sand beside the Columbia River near Vancouver, Washington. The cash was identified as $5800 of D.B. Cooper’s money; the serial numbers matched those recorded by the FBI before they delivered the ransom cash. No other money was found, though, and it’s the only Cooper cash uncovered so far… D.B. Cooper smoked; his brand of cigarettes was Raleigh… The 1981 movie The Pursuit of D.B. Cooper starred Treat Williams and Robert Duvall in a fictionalized version of Cooper’s story… Northwest Orient became known as Northwest Airlines in 1986, then merged with Delta Airlines in 2008.