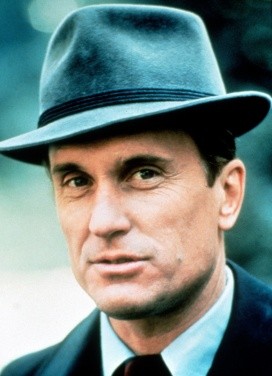 A leading man and character actor since the 1960s, Robert Duvall has specialized in taciturn cowboys, fierce leaders and driven characters of all types. He made his screen debut in 1962 as the creepy Boo Radley in To Kill a Mockingbird and played a bad hombre opposite John Wayne in True Grit (1969). In the 1970s he worked often with Francis Ford Coppola, appearing in The Godfather (1972, with Marlon Brando), The Conversation (1974) and as the fanatical Colonel Kilgore in Apocalypse Now (1979). He earned Oscar nominations for roles in The Godfather (1972), Apocalypse Now (1979), The Great Santini (1979) and The Apostle (1997) and won the Best Actor Oscar for 1983’s Tender Mercies. On television he was Emmy-nominated for the hit 1989 miniseries Lonesome Dove in a memorable pairing with Tommy Lee Jones. Duvall has also directed films, including The Apostle and the 1975 rodeo documentary We’re Not the Jet Set.

As a young actor Duvall once shared an apartment with Dustin Hoffman and Gene Hackman… Duvall played Dwight Eisenhower in the 1979 miniseries Ike.

Something in Common with Robert Duvall