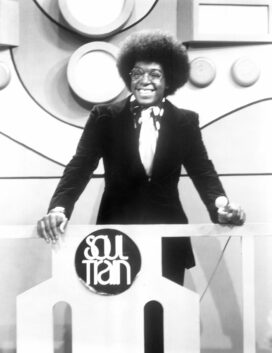 Don Cornelius was the creator, producer, and longtime host of the long-running music show Soul Train.

He turned the idea into a show for Chicago station WCIU in 1970, then moved the show to Los Angeles and syndicated it across the country in 1971.

Soul Train became an iconic show for African-Americans: a weekly showcase of R&B music and urban fashion, and one of the few outlets for black culture on American television at the time.

The show introduced the “Soul Train line,” with dancers strutting down a row for the cameras to the music of artists like James Brown, Aretha Franklin and Prince.

Don Cornelius himself hosted Soul Train from 1971 until 1993 — with “his deep voice, his sharp suits, his aviator glasses and the stage presence of a grown-up music fan,” as The New York Times wrote after his death — and ended every show with his trademark sign-off of “Love, peace and soul.”

He continued to produce the show with other hosts until 2006; by then it had become one of the longest-running shows in American television history.

Don Cornelius died in 2012 of a self-inflicted gunshot wound.

Soul Train is sometimes compared to American Bandstand, a similar long-running show hosted by Dick Clark… Don Cornelius was married twice: to a childhood sweetheart, Delores Harrison, and later to Russian model Viktoria Chapman (from 2001 until their divorce in 2009). With Delores Harrison he had two sons, Anthony and Raymond.

Something in Common with Don Cornelius