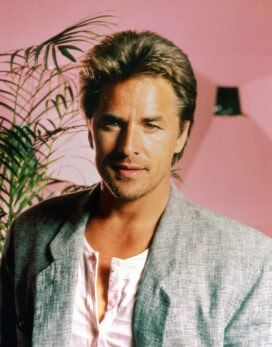 A veteran of routine leading man roles during the 1970s, Don Johnson labored in relative obscurity until the smash success of the stylish 1980s police drama Miami Vice (1984-89).

The MTV-inspired Vice starred Johnson as James “Sonny” Crockett, a macho undercover cop whose pastel casual chic clothing kicked off a national fashion trend. The fast-living, dimpled rogue that was Crockett seemed to be an extension of Johnson, whose wild times off-screen were frequently reported in the tabloids.

After a stint in rehab in the early 1990s, Johnson bounced back with another successful TV series, Nash Bridges (1996-2001).

Although his big screen career never matched his television success, Johnson has  appeared in several feature films over the years, including his starring turn in the cult favorite A Boy and His Dog (1975, from a story by Harlan Ellison).

A regular face on television, Johnson has also appeared in East Bound & Down, From Dusk Till Dawn: The Series, and Sick Note (2017).

Don Johnson was married to actress Melanie Griffith twice, once in 1976 and again from 1989-96. Their daughter is the actress Dakota Johnson, who starred in Fifty Shades of Grey… Don Johnson has a son with actress Patti D’Arbanville… Don Johnson released the 1986 album Heartbeat which featured a hit single of the same name… The role of Sonny Crockett was played by Colin Farrell in the 2006 feature film remake of Miami Vice.

Something in Common with Don Johnson