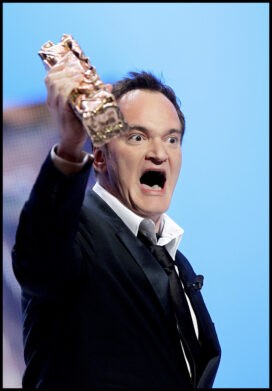 Quentin Tarantino is the two-time Oscar-winning writer and director of films like Pulp Fiction and Django Unchained. He is best known for films that combine over-the-top violence, talky wit, beaucoup film and pop culture references and a freewheeling approach to plot and narrative structure.

A high school dropout and video-gobbling film freak, Quentin Tarantino took Hollywood by storm in 1992 with the cult hit Reservoir Dogs, the robustly violent story of six strangers hired for a jewelry heist. His signature combination of funny dialogue and brutal violence hit a new peak in 1994 with Pulp Fiction, which won him an Oscar for best original screenplay and revived the career of John Travolta.

As an overnight success, Quentin Tarantino was considered a genius by some and a snotty upstart by others, giving him ample publicity and adding to his mystique. In 1997 he had a solid, if not spectacular, hit with Jackie Brown, starring 1970s star Pam Grier. Tarantino also began to dabble in acting, appearing with Antonio Banderas in Desperado (1995), with George Clooney in From Dusk Til Dawn (1996), and in a recurring role in the Jennifer Garner TV series Alias.

In 2003 he announced that his film, Kill Bill (starring Uma Thurman and Lucy Liu) would be released in two parts. The first part was released in 2003, and the second part was released in 2004. He teamed with filmmaker Robert Rodriguez for the 2007 “double feature” project, Grindhouse (with Rose McGowan and Kurt Russell), and released his World War II drama Inglourious Basterds in 2009.

Quentin Tarantino married Israeli model Daniella Pick on November 28, 2018. He was 55 and she was 35; it was the first marriage for both. The couple reportedly met when Tarantino was in Israel promoting his 2009 film Inglourious Basterds.

Something in Common with Quentin Tarantino