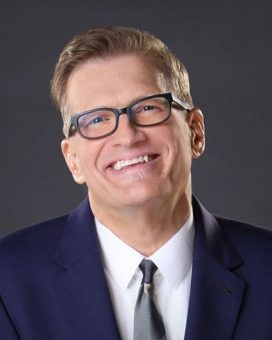 Drew Carey is the game show host who came to stardom by way of the successful sitcom The Drew Carey Show.

Drew Carey grew up in Cleveland and graduated from James Ford Rhodes High School there in 1975. He attended Kent State University for parts of three years; never a sterling student, he left in 1980 and joined the U.S. Marine Corps reserves in 1980, serving until 1985. He has credited his time in the Marines with establishing his signature buzzcut-and-black-glasses look.

Carey returned to Cleveland and began doing standup comedy. Over the next six years he worked his way up, breaking through with a successful appearance on Johnny Carson‘s Tonight Show in 1991. By 1995 he had landed his own TV series, The Drew Carey Show, launched during the wave of “standup sitcoms” that followed the success of the show Seinfeld. The show’s comic material was based on Carey’s working-class Cleveland roots, his blocky crew-cut-and-black-glasses appearance, and his raucous bachelorhood. The Drew Carey Show quickly became a hit and ran until 2004.

Carey also hosted the American version of the British TV improv show, Whose Line Is It Anyway?, which ran in various network formats from 1998-2006. He hosted a similar animation-improvisation variety show called Drew Carey’s Green Screen from 2004-05.

In November of 2007, Drew Carey succeeded Bob Barker as the host of the long-running game show The Price Is Right. (That same year he began hosting a much shorter-lived game show, the CBS prime-time program Power of 10.) With Carey at the helm, The Price Is Right kept rolling along, and in 2017 the show celebrated his 10th year as host.

Drew Carey became a minority owner of the Seattle Sounders Football Club (that is, soccer team) in 2007, and is well known as a booster and fan of the team and of the sport.

Drew Carey’s first film role was a bit part in the 1993 movie Coneheads, alongside fellow comedians Dan Aykroyd, Phil Hartman and Chris Farley… His fellow owners in the Seattle Sounders have included Hollywood producer Joe Roth, businessman Adrian Hanauer, and the late software and sports mogul Paul Allen… Drew Carey has been engaged twice — to chef Nicole Jaracz in 2007, and to sex therapist Amie Harwick in 2018 — but both engagements were called off… The Price Is Right first aired on September 4, 1972. Bob Barker hosted for 35 years until Carey took over in 2007.

Something in Common with Drew Carey