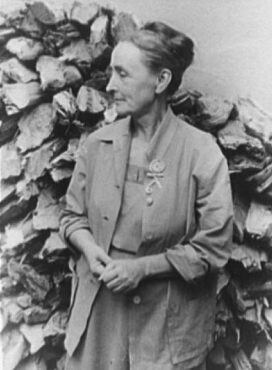 Georgia O’Keeffe was born in Wisconsin, raised in Virginia and schooled in Chicago and New York, but she is generally associated with the American southwest, particularly New Mexico. She was one of the most celebrated women artists of the 20th century, known especially for her desert-inspired images. Some of these were sensual and colorful paintings of flowers or hills, such as Cottonwood III (1944). Others were austere images of weathered bones, such as Cow’s Skull With Calico Roses (1931). O’Keefe married photographer and gallery owner Alfred Stieglitz in 1924, and he was an ardent promoter of her work until his death in 1946. A few years later she moved to New Mexico for good. O’Keeffe received the Presidential Medal of Freedom from Gerald Ford in 1977 and the National Medal of Arts from Ronald Reagan in 1985.

Something in Common with Georgia O’Keeffe