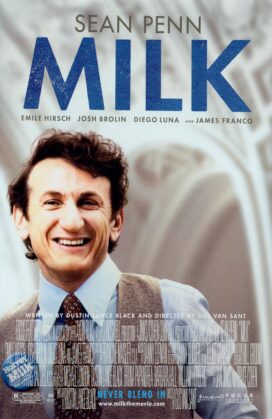 Harvey Milk was elected to San Francisco’s Board of Supervisors in 1977 and became the first openly homosexual elected official in California. Less than a year after taking office Milk was murdered — along with San Francisco mayor George Moscone — by Dan White, a political opponent and former member of the Board. Milk was a charismatic New Yorker who was a graduate of the University of Albany (1951) and a U.S. Navy veteran (discharged in 1955). He moved to San Francisco in 1972 and set up a camera shop in the city’s Castro district, then quickly got involved in local politics. After two unsuccessful bids for a seat as a city supervisor (1973 and 1975), he made it into city politics as an appointee of Mayor George Moscone, then won the 1977 election for a seat (one of six) on the Board of Supervisors. Milk made national news — he was an openly gay elected official at a time when homosexuality was not part of the public debate. The “Mayor of Castro” was a champion of urban neighborhoods and grassroots activism, but he’s most famous for his role as a symbol for gay and lesbian rights. On 27 November 1978 he was killed by Dan White, a disgruntled former city supervisor who felt wronged by Moscone and Milk. White climbed through a window at City Hall and killed both men with a pistol. White’s defense was his “diminished capacity” from depression, exacerbated by sugary junk food — what became known as the “Twinkie defense” (after a popular snack food). White was convicted of manslaughter and sentenced to seven years in jail, an outcome that caused a riot outside San Francisco’s City Hall on 21 May 1979 (called the “White Night Riot”). Milk’s legacy as a martyred hero has inspired books, plays and movies, including the Oscar-winning documentary The Times of Harvey Milk (1984) and the Gus Van Sant film Milk (2008, starring Sean Penn as Milk and Josh Brolin as White).

Milk was cremated, and his remains were buried at sea in a box wrapped with the Sunday comics, including Doonesbury (by Gary Trudeau) and Peanuts (by Charles Schulz)… Milk ran unsuccessfully in 1976 for the California state assembly… White was released from prison in 1984 and committed suicide in 1985.

Something in Common with Harvey Milk