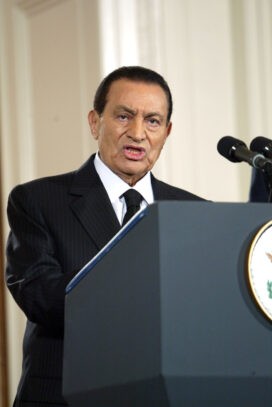 Death of the 'Accidental Pharaoh'

Reflection on his career in the Arab News

2016 document from the U.S. State Department

Anatomy of a Dictatorship

Muhammad Hosni Mubarak was the president of the Arab Republic of Egypt for 30 years, from 1981 until he was forced to resign by mass protests on 11 February 2011.

Hosni Mubarak was trained as a pilot and rose in the ranks of Egypt’s air force during the 1960s and ’70s.

President Anwar Sadat named Mubarak to be his vice president in 1975, and in 1978 Mubarak became the vice chairman of the National Democratic Party (NDP), the governing political party in Egypt.

When Anwar Sadat was assassinated on 14 October 1981, Mubarak succeeded him and became the chairman of the NDP as well.

Mubarak quickly became an old-style strongman with full control of the government. Running uncontested, Mubarak won the presidency in national referenda in 1987, 1993 and 1999; after a change in laws, he won running against token opposition in 2005.

He focused on economic growth and inched toward political reform, but any economic gains in the 1990s were offset by criticisms that Egypt was a near-dictatorship; indeed, Mubarak never lifted the state of emergency imposed after Sadat’s assassination.

In February of 2005, Hosni Mubarak announced plans for a September 2005 election that would be Egypt’s first-ever multi-candidate contest for the presidency. On 7 September 2005 he handily won his fifth consecutive term in those elections, but the victory was clouded by low voter turnout, reports of fraud and the imprisonment of his political rival, Ayman Nour.

The next years were dominated by pressures for political reform and by Mubarak’s love/hate relationship with the United States, a steady provider of military aid.

Mubarak was rebuked for his lack of commitment to democracy by American leaders, including President George W. Bush and Secretary of State Condoleezza Rice, but he remained an important U.S. ally in the region, especially during the U.S. war in Iraq.

Egyptians took to the streets in January of 2011 to protest his rule; more than 900 protesters were killed in February of that year by Mubarak forces, and he was forced to resign.

Mubarak was detained in April and held on charges of corruption and complicity in the killing of the protesters. Acquitted on the corruption charges, Mubarak was found guilty for his role in the protesters’ deaths and sentenced to life in prison. He was retried and convicted of lesser charges, then he was acquitted by a higher court and released from prison in 2017.

Hosni Mubarak’s wife was Suzanne Thabet Mubarak… Their son, Gamal Mubarak, was considered to be Hosni’s likely successor until the revolts of 2011 ended Mubarak’s reign.