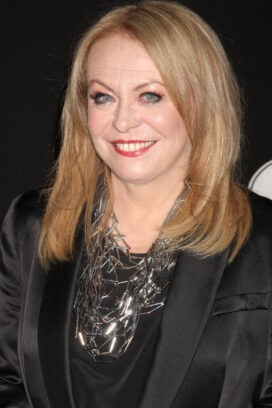 Jacki Weaver’s 45 years in Australian film, TV and theater were capped with critical acclaim and many award nominations for her role as a crime family matriarch in the 2010 movie Animal Kingdom. As a young actress she was a wide-eyed blonde, and she was a hit in the romantic comedy Stork (1971). She went on to roles in the landmark mystery Picnic at Hanging Rock (1975) and other films including Caddie (1976), The Perfectionist (1987), and Cosi (1996). She also had recurring roles in Australian TV series ranging from Matlock Police to Tickled Pink and Trial by Marriage, but her real forte was live theater, where she appeared in dozens of plays, primarily at the Sydney Theater Company. Widely loved in Australia, she was little known in America until her turn as sociopathic mum Janine ‘Smurf’ Cody in Animal Kingdom earned her an Oscar nomination as best supporting actress — the first Oscar nomination of her career. She earned her second Oscar nomination for her supporting role in 2012’s Silver Linings Playbook (with Robert DeNiro and Bradley Cooper). Weaver’s 2005 memoir was titled Much Love, Jac.

Jacki Weaver is 145cm tall — just over 4’9″ — according to a 2010 article in TimeOut Sydney. A 2009 article in the Australian paper The Age gave the same height… Jacki Weaver says in her autobiography that she was born in Hurstville, which is a suburb of Sydney, Australia… She has been married five times. Her first marriage, at age 18, was to David Price. She has one son, Dylan, born on 4 December 1970; his father was producer John Walters… Melissa Leo won the Oscar as best supporting actress in 2011, the year Jacki Weaver was nominated.

Something in Common with Jacki Weaver