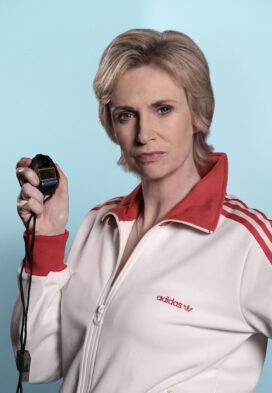 Jane Lynch is known to TV viewers for her roles on the TV shows Two and a Half Men, The L Word and Glee.

Lynch graduated from Illinois State with a theater degree, then earned an MFA in theater from Cornell before beginning her career on the stage.

She toured with the Second City comedy troupe and landed in Chicago, where she filmed her first movie role — a small but noticeable part in the Harrison Ford thriller The Fugitive (1993).

On the big screen Jane Lynch is known for her comedy performances in the Christopher Guest movies Best in Show (2000), A Mighty Wind (2003) and For Your Consideration (2007), and the manly comedies The 40 Year-Old Virgin (2005, starring Steve Carell), Talledega Nights: The Ballad of Ricky Bobby (2006, starring Will Ferrell) and Walk Hard: The Dewey Cox Story (2007).

Lynch won an Emmy award in 2010 for her role as the demanding cheerleading coach, Sue Sylvester, in Glee.

Jane Lynch married Lara Embry in Massachusetts on 31 May 2010… In the late 1990s she wrote and starred in the stage play Oh Sister, My Sister… Her co-stars on Glee included Lea Michele and the late Cory Monteith.

Something in Common with Jane Lynch