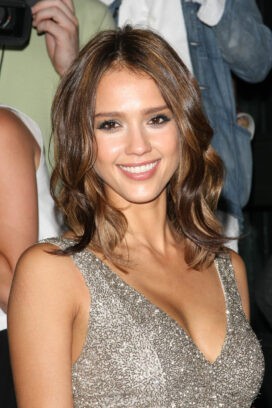 Jessica Alba is best known as TV’s Dark Angel (2000-02, produced by James Cameron) and as Sue Storm in the movie version of The Fantastic Four (2005, starring Michael Chiklis), and for co-founding The Honest Company.

Jessica Alba began working in front of the camera in the mid-1990s, appearing in television commercials and small roles in feature films. She had a recurring role in the Nickelodeon series The Secret World of Alex Mack, followed by her first starring role in the 1995 series Flipper.

She scored a double whammy in 1999 with appearances in the teen-friendly films Never Been Kissed and Idle Hands, and later that year James Cameron cast her as the title lead in his TV project Dark Angel. Since then she has worked mostly in feature films, usually playing a tough-but-vulnerable babe, as in Honey (2003, with Lil’ Romeo) and in the film version of Frank Miller‘s Sin City (2005, with Bruce Willis) and its sequel, Sin City: A Dame to Kill For (2014).

Jessica Alba has also had success as a businesswoman. She co-founded The Honest Company in 2013, which markets safe and eco-friendly household and baby products. The company went public in 2021; the website The Wrap reported that her shares were worth $130 million at the end of the day the company started trading.

Something in Common with Jessica Alba