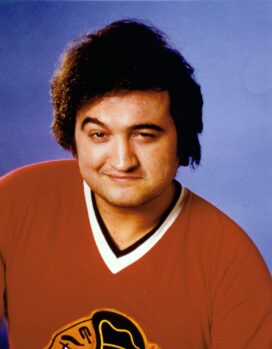 Pudgy and manic, John Belushi was hugely popular in the late 1970s, when he starred on Saturday Night Live and played the crass Bluto Blutarski in the campus comedy Animal House (1978). Belushi won an Emmy Award for Saturday Night Live, where his characters included crazed samurai and comical killer bees. His longtime creative partnership with his friend Dan Aykroyd included the 1980 movie The Blues Brothers and Steven Spielberg‘s 1979 war comedy 1941. In March of 1982 Belushi was found dead in a Beverly Hills hotel bungalow from an overdose of heroin and cocaine.

Something in Common with John Belushi