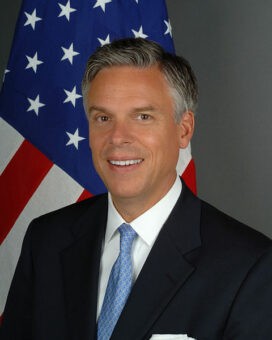 Jon Huntsman is the former governor of Utah who also served as the American ambassador to China from 2009-2011. One of nine children, Jon Huntsman grew up in Palo Alto, California; his father is the billionaire businessman Jon Huntsman, Sr. The younger Huntsman was an Eagle Scout at age 15, but then dropped out of high school to play in a rock band. He later got a GED, went on a Mormon mission in Taiwan for two years, and then graduated from the University of Pennsylvania in 1987 with a degree in International Politics. He went straight into politics, working as a staff assistant for President Ronald Reagan. He served in a variety of government posts, including the job of Ambassador to Singapore (1992-93), before being elected governor of Utah in 2004. A Republican, he took a generally conservative path as governor, but with twists: he cut taxes but supported civil unions and loosened liquor laws to promote tourism. Huntsman “exudes a level-headed vibe,” as The Salt Lake Tribune put it in one article. He was easily reelected in 2008, but resigned the job in 2009 after being picked by new President Barack Obama to be the U.S. Ambassador to China. He served in the job for 18 months before resigning in February of 2011. He announced on 21 June 2011 that he would run for the Republican nomination for president in 2012, but after a weak showing Huntsman suspended his campaign on 16 January 2012.

Jon Huntsman “speaks fluent Mandarin Chinese,” according to his State Department biography; he learned the language while on his Mormon mission in Taiwan… Jon Huntsman, Sr., was the 937th richest person in the world on the 2010 Forbes list, with a net worth at that time of $1 billion. His company, the Huntsman Corporation, invited the “clamshell” packaging for McDonald’s Big Mac hamburgers in the 1970s… Jon Huntsman, Jr. and his wife, the former Mary Kaye Cooper, were married in 1983. They have seven children, including adopted daughters from India and China.

Something in Common with Jon Huntsman