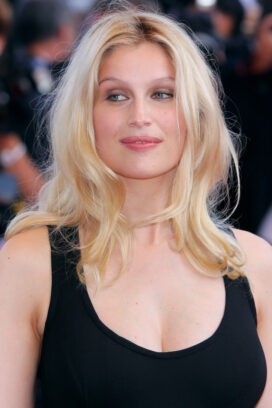 Supermodel Laetita Casta was reportedly spotted by a photographer while lying on a beach with her family at age 15.

Modelling work led to a contract with Guess? clothing, and with the internet boom of the 1990s underway, Casta became one of the Web’s most popular pinup girls.

She also appeared in the Victoria’s Secret catalog, in Sports Illustrated, and in the usual top-flight fashion magazines.

Casta’s popularity was so great in 1999 that she was chosen by a vote of French mayors as the model for new busts of Marianne, the revolutionary symbol of France who appears in sculpted form in French town halls.

Laetitia Casta has a brown belt in judo… Her daughter Sahteene was born in 2001; the father is photographer Stephane Sednaoui… Other famous Guess? models include Anna Nicole Smith, Eva Herzigova and Claudia Schiffer.

Something in Common with Laetitia Casta