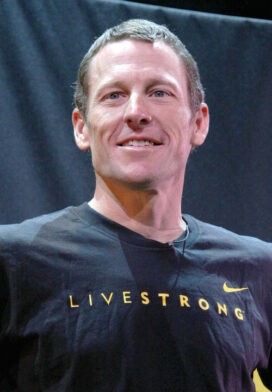 Lance Armstrong won the prestigious Tour de France an unprecedented seven straight times, from 1999-2005, before being stripped of those same titles in 2012 after investigators concluded that he had used blood doping to win.

Lance Armstrong’s story has had more ups and downs than ride through the Alps. He was a top amateur cyclist and turned pro after the 1992 Barcelona Olympics, only to discover in 1996 that he had testicular cancer which had spread to his brain and lungs. It was a potentially deadly disease, but after surgery and heavy chemotherapy, Armstrong returned to cycling.

Two years later he won his first Tour de France, as the lead rider of the U.S. Postal Service team, and then repeated the victory the next six years in a row. His string of wins broke the previous Tour de France record of five victories, held by Miguel Indurain (1991-95) and three others. Armstrong had lucrative endorsement deals with Nike, and his cycling fame was such that he wrote two memoirs: It’s Not About the Bike (2000) and Every Second Counts (2003).

After his 2005 win, Armstrong retired from cycling and spent more of his time running the Lance Armstrong Foundation (aka LiveStrong), the charity for cancer survivors that he founded in 1997. After nearly four years in retirement, he un-retired and raced in the Tour de France again in 2009, finishing third as his teammate Alberto Contador won the race. Armstrong then retired again in 2011, amid continued allegations that he had used performance enhancing drugs.

When Armstrong refused to participate in a 2012 arbitration process led by the U.S. Anti-Doping Agency (USADA), the agency banned him from the sport for life and announced he would be stripped of his seven Tour de France titles. That decision was confirmed by the International Cycling Union (UCI) on 22 October 2012; UCI president Pat McQuaid told a news conference that day, “Lance Armstrong has no place in cycling. Lance Armstrong deserves to be forgotten in cycling.” In 2013, in a lengthy interview with Oprah Winfrey, Armstrong admitted that he had, in fact, cheated while winning all of his Tour de France titles, using steroids, blood doping and performance enhancing drugs (PEDs).

In his 2005 season, Lance Armstrong’s racing team was sponsored by the Discovery Channel rather than the U.S. Postal Service. In 2009 he raced for Astana… Before being stripped of his titles, Lance Armstrong had been the second American to win the Tour de France: the first was Greg LeMond (1986 and 1989-90)… Five-time Tour de France winners: Jacques Anquetil of France (1957, 1961-64), Eddie Merckx of Belgium (1969-72, 1974), Bernard Hinault of France (1978-79, 1981-82, 1985) and Miguel Indurain of Spain (1991-95)… Lance Armstrong and the former Kristin Richard were married in 1998. They have three children: Luke (b. 1999) and twins Isabelle and Grace (b. 2001). The couple separated early in 2003 and were divorced that December… The same year, Lance Armstrong began dating singer Sheryl Crow; they became engaged in 2005 but ended the engagement in 2006… Lance Armstrong had another son, Maxwell Armstrong, with his girlfriend Anna Hansen in June of 2009. Their second child, Olivia Marie Armstrong, was born in October of 2010… Lance Armstrong is 5’11” tall, according to a 2006 article in the Austin American-Statesman.

Something in Common with Lance Armstrong