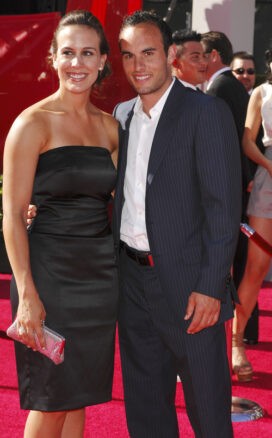 His personal and professional bio from the national squad

The Guardian archives for all the matches

The team roster gives you Donovan's stats and a proud bio

Long and detailed biography, with a teensy touch of soap opera

By age 24 Landon Donovan had played in two World Cups, won three Major League Soccer titles, and had three times been named the U.S. player of the year. A speedy striker with a scorer’s flair around the goal, Landon Donovan was a teen phenom: he was first called up for the U.S. national team in 1999, at the age of 17, and the same year he signed with the prominent German club Bayer Leverkusen. The pairing was a poor one; he was loaned back to the U.S. and played professionally for the San Jose Earthquakes from 2001-2004, helping the team to MLS Cup wins in 2001 and 2003. After another awkward stint with Bayer Leverkusen in 2005, he returned to America and joined the Los Angeles Galaxy, leading them to the 2005 MLS Cup and later pairing on the same team with English soccer star David Beckham. Donovan starred on the 2002 United States team that reached the quarterfinals of the World Cup, and by the World Cup of 2006 he had become the best-known player on the American squad. Donovan held the same distinction in the 2010 World Cup, scoring three goals in four games as the U.S. was eliminated in the round of 16. Donovan’s teams have won the MLS Cup four times:  in 2001 and 2003 with the San Jose Earthquakes, and in 2005 and 2011 with the LA Galaxy. He was named U.S. Soccer Athlete of the Year in 2003, 2004, 2009 and 2010.

Landon Donovan has a twin sister named Tristan… He has a tattoo of a hummingbird on the inside of his left wrist… He married the actress Bianca Kajlich in 2005; Kajlich had recurring roles in the TV shows Dawson’s Creek and Boston Public and co-starred in the 2002 film Halloween: Resurrection. They separated in 2009 and Donovan filed for divorce in 2010.

Something in Common with Landon Donovan