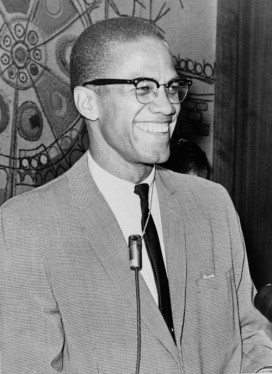 Malcolm X was the passionate and controversial Black activist who was assassinated in New York City in 1965.

Born in Nebraska and raised in a foster home, Malcolm Little had a troubled youth that included burglary and drug dealing. At age 20 he was sent to prison near Boston for a 10-year term. While in prison, he was introduced to the teachings of Elijah Muhammad and adopted the Black Muslim faith.

Malcolm X broke with the Nation of Islam in 1964. That same year he made a pilgrimage to Mecca and shortly afterwards he embraced orthodox Islam and took the name El-Hajj Malik El-Shabazz.

He recanted some of his earlier, more strident, viewpoints on race, though he remained a staunch advocate of “black power,” and founded the non-sectarian Organization of Afro-American Unity (OAAU).

Malcolm X was shot to death by a group of men while giving a speech in New York City in 1965; just days earlier his home had been firebombed. Some of the men had connections to the Nation of Islam, though a formal tie between that group and the assassination was never proven. Three men were convicted, even though one confessed and testified the other two — Muhammad A. Aziz and Khalil Islam — weren’t involved (or even there). Late in 2021, Aziz and Islam were formally exonerated by New York authorities. The full details of Malcolm X’s murder remain unknown.

The Autobiography of Malcolm X was published shortly after Malcolm’s death and became a best-seller; the book was co-written by Alex Haley, later the author of Roots.

Something in Common with Malcolm X