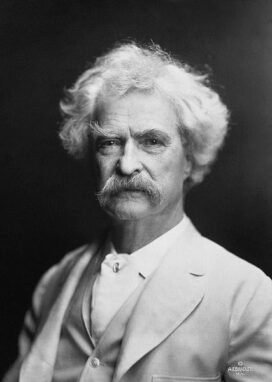 Mark Twain is on nearly everyone’s list of all-time great American authors. Mark Twain was raised in Hannibal, Missouri and as a young man held a series of jobs which included work as a printer’s apprentice, a Mississippi riverboat pilot, and a newspaperman in Nevada and San Francisco. He moved gradually from journalism to travel writing and then to fiction, aided by the success of his 1869 travel memoir The Innocents Abroad. His humorous tales of human nature, especially The Adventures of Tom Sawyer (1876) and Huckleberry Finn (1885), remain standard texts in high school and college literature classes. In his own day Twain was a tremendously popular figure and a celebrated public speaker who toured widely. Other Twain classics include Life on the Mississippi (1883) and A Connecticut Yankee in King Arthur’s Court (1889) and the short story The Celebrated Jumping Frog of Calaveras County (1867).

Mark Twain was born and died in years in which Halley’s Comet passed by Earth: 1835 and 1910… His pseudonym, Mark Twain, was taken from Mississippi riverboat terminology; it’s a measure of depth… Twain married the former Olivia Langdon in 1870; she died in 1904, and the melancholy tone of Twain’s later writings is often attributed to his depression over her death.

Something in Common with Mark Twain